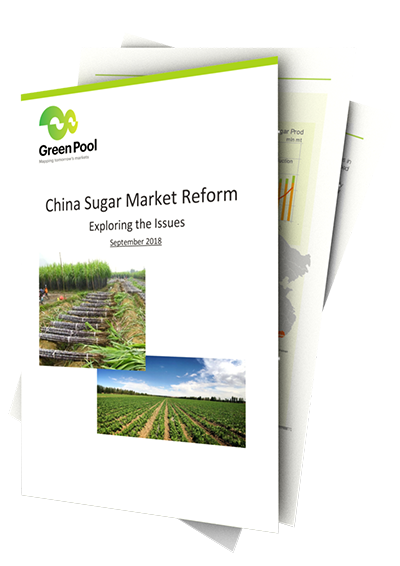 China is a major producer, consumer and importer of sugar in global terms. China’s sugar market has also seen substantial policy changes in the past 3-5 years, with important implications for both its domestic and the global market. Green Pool, as an independent market researcher, has been observing these market developments and reporting on them for many years. However, given the extent of the recent developments, the potential for changes and corresponding implications, we thought it merited a deeper investigation into some of the proposed changes being discussed within the Chinese sugar industry than is available in our regular daily, weekly or monthly subscription publications.

This study was produced in collaboration with Lindsay Jolly who, until recently, was a Senior Economist at the International Sugar Organization (ISO) in London. It covers 35 pages, including 5 maps, 10 tables and 43 charts and seeks to explore, amongst other things, the following main themes:

Why China is such a high cost producer of sugar – from both the cane and beet industry perspectives – and what does this mean?

The cost of China’s sugar production versus globally efficient producers is a (if not, “the”) major underlying problem since it is the government’s regulatory framework on China’s internal market which then compensates mills to process high set-priced cane. This, in turn, sets the scene for the now endemic smuggling of sugar into China - with major implications for both the domestic and world markets.

High prices and large stockpiles in China are not unique to sugar – this has occurred in other Chinese agricultural industries as well, most notably in cotton and corn. What lessons can be learned from those markets when the government was eventually forced to act to bring their domestic market prices more in line with global markets?

Could similar reforms be implemented in the sugar industry? If so, what scale of change is possible, and what are the likely flow through implications for the sugar sector?

As the internal price support is closely linked to sugar import policy to maintain price levels, we argue that both need to be addressed simultaneously. This report examines these issues and possible solutions to set the industry on a firmer footing, with a more

We concluded by discussing 3 potential scenarios where farmers are given a direct subsidy in place of the current distortive cane (and beet) pricing regulation and their potential implications.